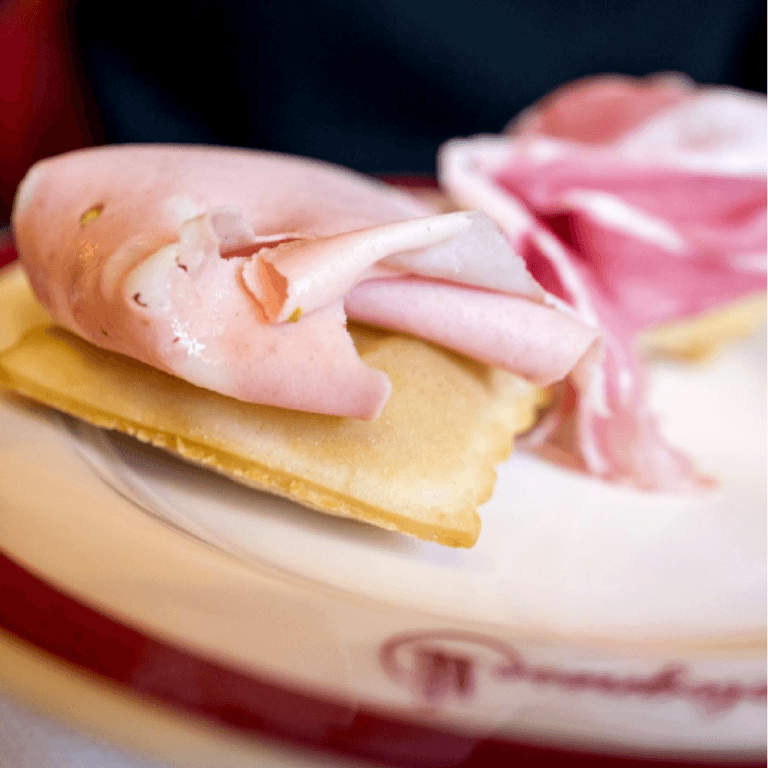 It seems that everything has already been said and done as regards this Italian speciality, enjoyed worldwide. We all know how it’s made and how delicious it is, but maybe not all are aware of the 5 fun facts we present here today.

1) Mortadella has always been around

The first evidences relating to this cold cut date back to the 1st century A.C. A slab from Roman times is preserved in the archaeological museum of Bologna, showing on one side grazing pigs, and on the other a pestle and mortar.

The ancient “farcimen myrtatum” (the current mortadella) was indeed made crushing pork meat in a mortar. This was then cooked and flavoured with spices and myrtle (hence the name in Latin).

2) Mortadella was the prerogative of the finest palates.

During the whole of the Renaissance and beyond, the unmistakable flavour of this cold cut was not only the most valued of all, but the favourite among noblemen and notable figures. It was so beloved, that, in the 17th century, the famous Dominican friar, agronomist and mathematician Padre Labat underwent an incredibly long journey from Martinica to Bologna just to try the exquisite mortadella!

It is no coincidence that, at the time, this precious cold cut was worth 3 times more that prosciutto.

3) Mortadella was covered under warranty.

A cold cut so appreciated demanded strict quality and origin controls. For this reason, in the 17th century, competent authorities determined that mortadella could be produced exclusively within the walled city of Bologna, from authorised pork butchers, and marked with a wax seal.

The most famous notice dates back to 1661 and was issued by Cardinal Girolamo Farnese in Bologna, in order to block attempts to modify this product, defined as “isquisita perfettione”.

A long time has passed since the slab depicting the grazing pigs and the pestle. Currently, this cold cut is prepared by finely chopping pork meat and mixing it with fat cubes from the throat of about 1 cm per side. It is then seasoned with spices and stuffed in natural or artificial bladders, to then slow and gradually cook it in special stoves at a temperature of 70 degrees.

You are probably wondering if mortadella is still as appreciated as before. Well, currently, mortadella represents, together with tortellini, the most exported good of the Bolognese food industry…

5) Mortadella has a protected geographic indication (PGI) since 1998.

In the 17th century, Cardinal Farnese already had in mind protecting the true Mortadella from Bologna, but it had to wait until the 90s to earn the Protected Geographic Indication. The rules are very strict and encompass the areas of elaboration and the meat and method used to prepare the Mortadella from Bologna PGI, crown jewel not only of the Emilia region, but of all Italy.

Mortadella is a cold cut that has always been present in our appetisers. We propose Mortadella from Modena with pistachio PGI, accompanied by fried gnocchi, as tradition dictates.

For three generations we have devoted ourselves following the simple motto of our restaurant: great food, representing the best Emilian traditions, served in a cosy and elegant atmosphere.

Selected cold cuts, homemade fresh pasta, our famous mixed boiled meat dish and an unforgettable wine list that enumerates the best of the national production. The only problem you’ll encounter is choosing.

If you want to try the Emilian cuisine, don’t hesitate to come and visit us in Rome – in Piazza del Popolo 1 – and in Milan, in Via Amedei 8, just a short walk from the Duomo.

We will be happy to offer you a menu designed through experience, tradition, professionalism and, above all, passion for our land.